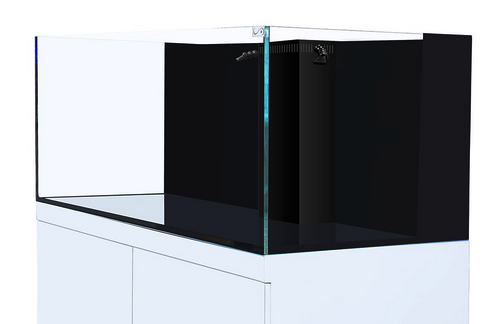 And so it starts again.  I had just returned home from a Hawaii trip and couldn’t stop thinking about my days on the beach of Hanuama Bay; snorkeling and watching the tangs and wrasse swing about in the shallow blue waters.  I was never really into fish growing up  even though my brother worked at a pet store and had access to all fishes and accessories. It just never dawned how exciting and interesting the hobby was.
I can remember my very first reef tank.  It was a 50 gallon slim and tall with a Homedepot stand that I had made while on a budget attending college in Pomona, CA.  I had all the basics such as live rocks, HOB skimmer, flourescent lighting (back in 2001), sump full of rocks and heater etc.  I learned as much as I could about the hobby and visited all the local aquariums to see the colorful fishes.  After finishing college 3 years later, I had to part with the tank prior to my move because I would be staying with my in-law who may not have the space for such a tank. After my wife and I was employed for 2 years in Sacramento, I decided to start up a small reef tank.  10 gallons to be exact.  Because I was starting my career in the tech field and resided in an upstairs apartment, I felt this was the better option.  Again it was short lived.
When I bought my first house in the rise of the market, I had the opportunity to purchase a complete 120 gallon system from a local ad.  I jumped on it and started the reef thing again.  I had the metal halide lighting with a sump and chiller.  Fresh rocks where shipped to me from Los Angeles to complete my setup.   In a little over 2.5 years the housing market started to crash.  Because of job loss, I had to sell everything and moved out to a small house.  No more tanks and no more fish.
Its now 2015 and about 10 years has passed since my last tank.  Coming back from Hawaii, I remember the excitement and joy of having a reef tank.  I quickly jumped on the Craigslist to see what deals were out there.  I stumbled on a CADLights Artisan II 100 gallon tank.  I’ve never heard of the brand before and being that there were mixed reviews out there, I figure I’d check it out.  In over 20 emails, I convinced the seller to sell the 100 gallon tank with the white stand for $700.  I’m not sure if it’s a steal or not but based on the retail price, it was more than half off.

I noticed it was missing 3 things from being a complete setup that would come from CADLights.  It was missing the glass canopy cover, the sump LED light and the skimmer.  To my calculations, the total cost of these 3 items plus the tank setup would still be less than half the price of a new one.

See the CL ad below.  It looks very well build and has a nice elegant touch to it.  Kind of like the ELOS tanks but at my price range.  Rimless added a bling factor to it and the low iron glass gives it the extra clarity.  The white piano finish on the stand is amazing.  I’ve read some bad reviews about the old stand but this new one seems to have remedy the old complaints.  Its time to drive out to the bay area to take a look at the tank and see if it’s worth the $700. Here’s the details on the ad: I arrived to the the seller’s house and proceeded to the garage where the tank was kept.  It was still in great shape so I immediately made the payment and packed it up.  After 2 hours of fighting through traffic on Interstate 80, I finally arrived home.  Here’s the tank, sump and stand. I found a stop in my living room and proceeded to level out the stand.  At first it was off so I had to get out some shims to adjust the level.  Now its at an acceptable level. Next, the rubber mat was placed on top of the stand to even the pressure points from the tank.  The tank was then placed on top. Finally the right door was adjusted so that the gaps were even and the doors straight. Thats all the hard work for today.  Now I’m off to bed.