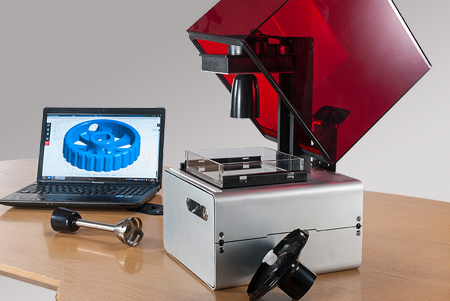 Before purchasing my Form 1+, I purchased the replica SLA 3d printer by CTC.  It was a replica of the Form 1.  I found it cheaper on Ebay so I took a leap of faith and purchased one with an extra bottle of resin.  It came to about $1600USD.  When arrived, the printer looks identical to the Form 1 but quality was not up to par.

The UV protector screen was ruby red instead of orange like the Form 1.  The back side of the UV protector is also double the thickness of the other side on the Form 1+.  This unit is the standard thickness all around.  Mine cracked a little in the back from shipment because it lacked acrylic support on the back edges.  The hinge holding the UV cover is wobbly and it has no tension in it to hold the cover semi up.  The only position is fully opened or fully closed.  The CTC unit also does not a magnet in the housing to stop operation when cover is opened.  I guess it reduces the cost a little.  Not much else here but preference.

The vat or resin tank is similar to Form 1 except for the fluid level indicator.  On the CTC, there’s a faint scratch mark to indicate low level and high level.  It’s hard to tell without really looking at it.  At first I thought it was a manufacture defeat but then realized it’s the level inidicator after looking at a Formlabs tray.  Something to pay attention to.

The aluminum case felt cheap.  It’s hard to explain but it’s like comparing a Precision Intercooler to an ebay knock off.  It’s looks the same as the original but the material seem/felt cheaper.  The surface looked scratched up with a coat of silver paint on top to make it shine again.  Maybe I’m exaggerating but it was not built with quality.  One can argue that it’s cheapness in price explain its cheap materials but my thought is if it’s going to copy a product, at least make it worth it.

The power unit is a standard step down 120v to 24v unit.  What I didn’t like was that it made a spark when plugging in the 24v output into the unit.  Probably a grounding issue but it still worked so I just made sure it was plugged in before plugging in the chord to the wall.

Resin for this printer was no where to be found by the creator online.  I had to resort to asking the ebay seller.  They were happy to sell me a 500ml bottle for about $115.  I thought that was expensive for a knock off so I went with makerjuice for my prototyping projects.  Worked great.  One thing to note is that the resin that came with the unit is clear with a strong odor. It’s in the $1500 range for this printer.  It’s still pricey for most but considered cheap when compared to other SLA printers.  Print quality is great and way better than FDM printers.   It will work with other third party resins.  Overall it’s not a bad printer to own.  Just understand that prints will definitely not be in specs and parts for this printer may be hard to find unless using Formlabs parts (it it fits that is).

Overall this printer is great for the money but I had issues with the correct measurements when printing.  The squares were too big and tilted while the circles came out oval and out of measurements.  I complained to the maker and received little results.  The printer printed fine with the resin it came with but I had some issues with using makerjuice.  Even at 100 micron, the layers on the makerjuice print looked like it printed at 200 micron.  I had to sand it down a bit to get an accepting looking object.  Only buy this printer if you’re printing solo random objects.  If you need the print to be accurate, I’d suggest forking out money to purchase the real deal at double the cost.

Let me know your thoughts below.