We depending so much on Youtube for entertainment, research, business networking, etc. that we get antsy when it’s down.

Just now I was trying to watch a video on reefing and notice that youtube was down on my phone. Oddly I thought it was just my phone but when I tried it on my computer, it gave me the same error. I thought it was my Comcast service. I did a speed test and everything was fine.

It finally hit me….. Youtube is down.  I went to https://downdetector.com/status/youtube/map/ to see if Youtube was down and sure enough it was.  It’s has been more than 40 minutes now since I’ve noticed it being down.

It feels strange and odd.  We depend so much on Youtube for video content and it’s now that it’s down, we somewhat feel lost.

We depend so much on technology to drive us. Remember that Technology has it’s days and today is Youtube’s day.

I can only hope that it comes back up soon as I wanted to watch a video that I had marked to watch later. Let’s hope it’s not down a long time. This will hurt those who depend on Youtube advertising for an income.

See the reports of Youtube’t outage in the last 40 minutes.  It has skyrocketed.

This looks to be a World Wide reporting of Youtube’s Outage.

Here’s Youtube’s acknowledgement on the outage. 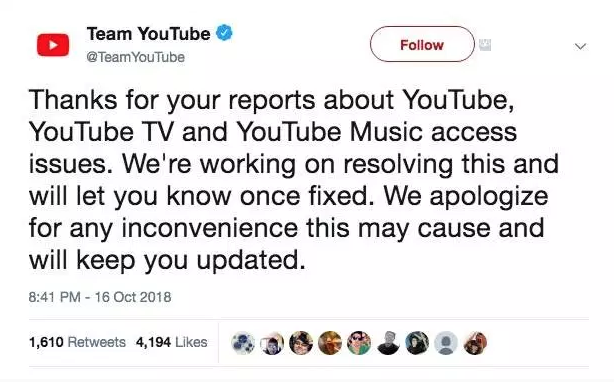