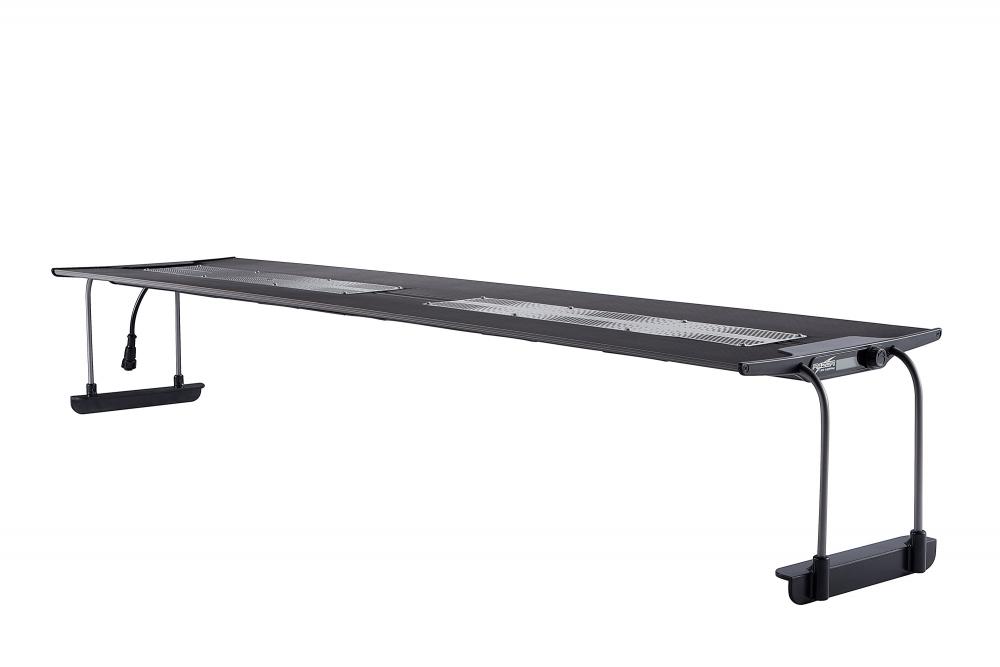 After hours upon hours of research, it came down to 3 units.  The Radions, from Ecotech, Hydra HD from AquaIllumination or Razors from Maxspect.  The Hydras come in a white casing which sparked my interest.  Lighting were great and quality were top notch however it was too big/thick for my taste.  It was my second option.  The Radion by Ecotech were similar to the Hydras but was not on par in terms of aestitics.  I was looking for a light setup that was different, nice, sleek and powerful.  Maxspect just seemed to deliver all of what I was after.  The 4 foot Razor LED was very thin (under 1 inch thick). It has a great quality build with alluminum casing multiple fins for cooling.  The design was like no other that I’ve seen.   The only downfall is the lack in channels and light configuration points. There’s only channel A and B.  There also only 6 points for the light to shift to.  All in all I think it’s a good starting point for the Maxspect.  I’m sure that there newer models will have more bells and whistles.

On my search for the lighting system, I found that the Maxspect Razors range from $900-$1200 depending on who was selling it. I had the option of combining two of the smaller units or one long unit. I’d prefer to reduce wiring and stick to one long unit. After 2 weeks of monitoring the local ads, forums and ebay, I found a brand new unit (open box) that was within my price range of $500.  I waited till the last minute to place my bid at $540 and won.  It was a great feeling. From $900 to $540.  Thats 40% off.  I’m always on a deal hunt and this was one of them.  It’ took 5 days to receive the item but it was worth it.  When the unit arrived, it was boxed well and came with all the component.  The unit is super thin but the power supply was very bulky. I didn’t like how big the power supply was but since it’s going to be in the cabinet, I was okay with it.

I’m very impressed with it so far.  I’ve had it for a week and have been playing with the automatic settings.  It’s great if you don’t need a lot of features and functions.  It just works.  One thing that annoyed me was the power supply fan.  It keeps coming on ever other minute when it gets hot.  I’ve seen replacement fans from Coralvue and I might venture out to replace mine. For now it’s going on the tank setup.